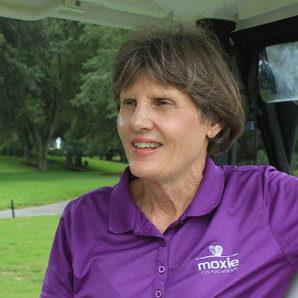 More Than a Teacher

Barb “Moxie” Moxness is more than a teacher. She has years of playing experience that she brings to her students. Barb grew up in Minnesota and began playing golf at age 10 under the coaching of her father, Roger Kuhlmann. She began competing at age 13 and won her very first tournament. She continued to compete in amateur events in Minnesota and around the country until college. She attended Arizona State and San Diego State and played on both golf teams finishing 7th in the individual NCAA National Championship her last year at SDSU.

Barb has been married to her husband, Mark, for 46 years. They reside in Edina, Minnesota. Blessed with a wonderful family! Son, Matthew and the family of son, Tim and his wife, Kari and first grandchild, Hayden.

One of Barb’s passions is writing. She has written several books that bring insight into how the physical, psychological and spiritual all work holistically in our golfing experience. Her writings include: "Golf From The Inside Out" and "Managing and Curing the YIPS Permanently". 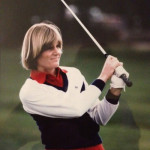 Barb qualified for the LPGA Tour in 1978 and was a consistent top ten finisher. She finished in the top ten in all LPGA Majors including the USGA Women’s Open, The Nabisco Dinah Shore, The LPGA Championship and The DuMaurier Classic. She had three second place finishes while on the LPGA Tour and finished 18th on the money list in 1982 and played on the victorious LPGA Pioneer Cup Team (LPGA vs Japan) in 1982.

Barb retired from full time competition on the LPGA Tour in 1986 to be a stay-at-home Mom. 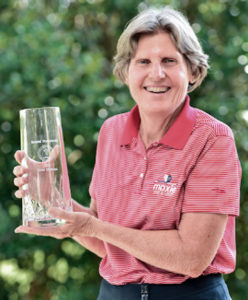 She returned to professional competition in 2000 playing the official LPGA Senior Tour, The Legends Tour. She won the Buehler Classic in 2005 and the JCI Challenge in 2014. She is a consistent top ten finisher on The Legends Tour and ranks 4th on the career points list. She has served on the Board of Directors for The Legends Tour.

As a member of the LPGA Teaching and Club Professional Division she won the 2012 and 2018 LPGA T&CP Senior National Championship, winning the 2018 tour by 11 shots.

Barb says about her playing career,

“While I was on the LPGA Tour I began to lose my love for the game. I was a good player but was frustrated that I didn’t reach the level of competence that I thought I was capable of. I was a prisoner of swing thoughts and experienced doubt and fear about my abilities. But I was fortunate to meet AJ Bonar in 1986 and that changed my life forever. He showed me how to access my athletic ability and just use the golf club efficiently.

"Since then I have experienced redemption in my playing career. I am now a player and not a mechanic, I stopped thinking and started playing and have played some of the best golf of my life despite growing older in age”. 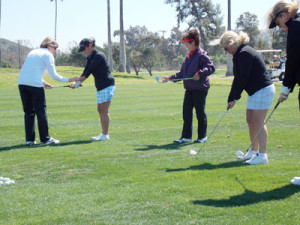 Barb brings her playing experience into teaching. She began her teaching career in 1986 under the direction of AJ Bonar at the San Diego Golf Academy. Later she founded the Moxie Golf Academy to inspire and teach her students what she had learned from her playing career. To enhance her teaching, she went back to college and graduated with honors in Psychology from Northwestern College in St. Paul, Minnesota in 2002. She is Class A member of the LPGA T&CP Division and has been named a top teacher by Golf Digest. Some have called her the “Golf Whisperer”.

Barb says of her teaching,

“I believe as a teacher I hold a responsibility to help my students. If they don’t see measurable results then I am not doing my job well. Fortunately with the Moxie Golf Process my students see immediate improvements. I consider it a privilege to share the Moxie Golf Process with fellow golfers and have them experience the same definitive improvements I have experienced in my playing career.

"My goal is to help my students experience measurable improvements in their golf games and lives as a result of discovering the Moxie Golf Process, just as I have in my playing and teaching careers."