Barbara Moxness in the Media

Barb played in 4 professional tournaments this summer and at 68 years of age she continues to be competitive. She would say that the Moxie Process continues to help her get better even as she is getting older.

Barb came in 2nd in the LPGA Teaching Division Senior National Championship at Kingsmill, Virginia. She was the oldest one in the field!

She came in 3rd in the LPGA Senior National Championship at French Lick, Indiana. (see video below)

Barb was the oldest one to make the cut, and 5th in the Land O Lakes Legends of the LPGA Tournament in Minnesota—shot 67 the last day!

She came in 17th in the USGA Women’s Senior Open at Brooklawn Country Club in Connecticut—was the oldest one to make the cut. 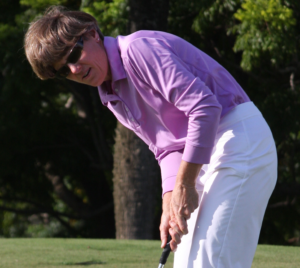 Barb Moxness is an LPGA and Legends Tour Golf Professional, and founder of Moxie Golf Academy, based in Rio Verde, Arizona. Moxness was recently interviewed by host Ken Sherman from Business Innovators Radio, talking about Moxie Golf Academy, the “Moxie Golf Process,” her best-selling books Golf From The Inside Out and Connect The Dots With Mini-Mox, and her philosophy of golf and life. READ MORE

It’s been six years since Barbara Moxness won the Senior division at the 2012 LPGA T&CP National Championship, but in her first time playing Pinehurst No. 8 she was firing on all cylinders and won by 11 shots... READ MORE

Barb Moxness Picks Up Second Legends Win at the Judson

Barb Moxness' last win on The Legends Tour was the 2004 Buehler Classic. She broke the 10-year drought with a birdie on the second playoff hole to defeat two-time defending champion Alicia Dibos at the 3rd annual Judson Collegiate & Legends Pro-Am.

“In a one day event I think you have to be aggressive, but this golf course is really difficult," said Moxness. "You just have to manage it and fortunately, I putted really well today.”

Moxness fired a regulation round of 68. “I think what sparked the round was number 13, the par 5, I knocked it in the hole from the fairway there for three. So I went from one over, because I had bogeyed the hole before, to one under and that kind of put everything back together for me. I played well after that.”

Dibos also finished 3 under, forcing a replay of 18 to determine an outright winner. Moxness and Dibos traded birdies on the first playoff hole. Dibos second shot on the second playoff hole found the greenside bunker and she splashed out to 25-feet for birdie. Meanwhile, Moxness was on in two and putting for eagle. Dibos missed her birdie attempt while Moxness' eagle putt slid just by and she tapped in for the win.